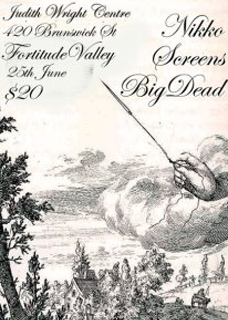 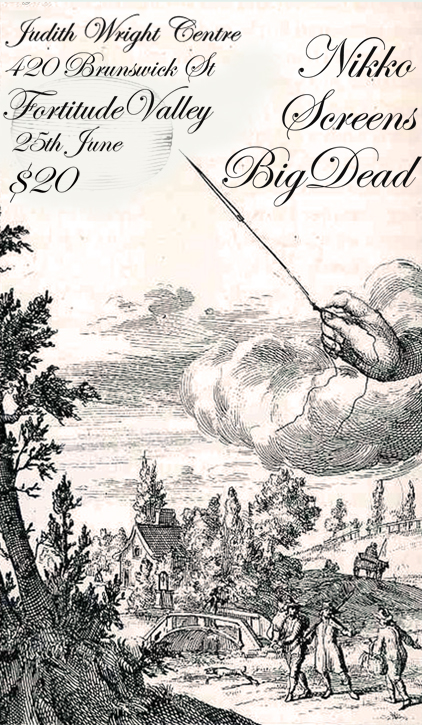 On Saturday 25th June the Judith Wright Centre will play host to a special concert event featuring three of Brisbane’s premiere independent musical acts – Nikko, screens and Big Dead.
Needing only scarce introduction, Nikko have gained a reputation as one of the city’s finest live acts since their formation in 2005. Having been described as “post-murder-ballad-rock” and “as dark as it is wonderfully complex” the band released their debut album “The Warm Side” to stellar reviews and are currently hard at work recording a follow-up due to hit the streets later this year.
Nikko will be taking to the stage of this special event with an extended line-up and will be giving away copies of their EP “Live at The Tote” as a one-off show of thanks to those who make it out to the concert.
Since their triumphant live debut at The Globe in February this year, screens have been making some very big waves in the local music scene, with an innovative multimedia experience combined with dynamic and progressive post-rock sound creating conceptual works of audio and visual storytelling.
Driven by a desire for live storytelling, the five on-stage members of the band are accompanied by an unseen sixth who controls live visuals via projector, enveloping audiences in enigmatic journeys that redefine the boundaries of live music and cinema. Screens are excited to bring this experience to the ambient surrounds of the Judith Wright Centre and share the hard work and passion with all those who are lucky enough to attend.
Big Dead have been active in the local music scene in one form or another since 2008. They have recently finished recording their debut EP, “A Very Short Story” and have since reformed with a new line-up, shifting their focus to explosive interactive improvisation and instrumental composition.
With intermission music and spoken word provided by Steve Handly – The Diplomat, doors open on this special concert event at 7pm. The Judith Wright Centre is located at 420 Brunswick Street, Fortitude Valley. Tickets to this event are $20 and will be available for sale from www.jwcoca.qld.gov.au. For more information please visit facebook.com/wearescreens