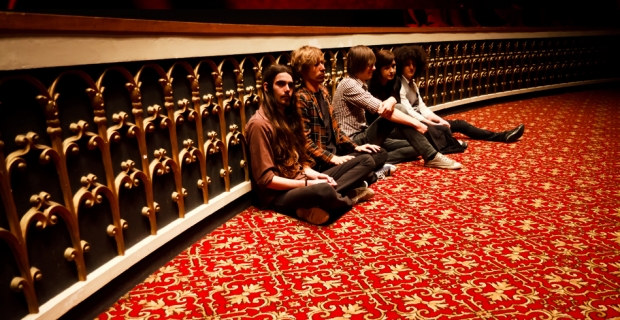 Fresh from performances at the Judith Wright Centre and The Zoo, having shared the stage with some of the cream of Brisbane’s talent, SCREENS are proud to present a night of wonderful local and interstate music at the venue where it all started.

SCREENS will bid a fond farewell for a few months to work on a brand new performance piece for unveiling towards the very end of the year, a fully integrated cinematic experience that the group will be proud to share with you. As a last hurrah before taking some time off, SCREENS are delighted be joined on stage by one of Sydney’s most promising up-and-coming post-rock acts – Solkyri, who will be touring their “No House” EP, and local Brisbane wunderkinds Ghost Notes. This will mark a full circle for the first chapter of SCREENS’ foray into the Brisbane live scene, having debuted at The Globe in February to an amazing audience and glowing reviews. Be there to witness the act bring their post-rock flavoured soundscapes and cinematic ambience to Brisbane before they buckle down to hone their fresh new performance.

SOLKYRI have released their debut EP this year to critical acclaim and have been dubbed an act to look out for by critics and post-rock connoisseurs the world over. With a well-arranged anthemic sound and a polished and energetic live performance, the three-piece are very excited to share the very special shows on this tour as they make their way through Sydney, Brisbane and Melbourne, and we know you will make them welcome as they present their post-ambient-rock sounds to a Brisbane audience.

GHOST NOTES will be rounding out a top-class bill of post, prog and experimental music. Their second album “By Cover of Night” was released to wide-spread acclaim, reaching the top of the 4ZzZ charts upon release, and receiving 4.5 – 5 star reviews. Their mix of ambient and post-jazz-rock features horns, bowed saw and keyboards to create brooding atmospherics that not only give a nod to their peers and influences, but sit comfortably alongside them.

The Globe is situated at 220 Brunswick St, Fortitude Valley and features a well priced bar, pool table and a lovely performance space.

Tickets from The Globe and available on the night.